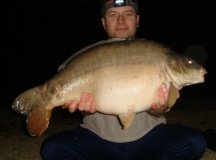 After arriving at the Linear Fishery in Oxford, I decided to target the Hardwick's and Smiths lake for a change. I hadn't fished this lake before but heard that there was some lovely original carp present in the picturesque lake. As I drove down the side road I could see Hardwicks lake on my left. This lake had previously been 2 separate lakes, but they had cut out part of the bank to create one bigger lake. Linear also had the idea of leaving the majority of the bank intact and this helped create numerous extra pegs in the middle of the Hardwick and Smith lakes.

This lake on the Linear complex is the least busy venue but it contains the least numbers of carp. However, the carp are in beautiful condition and worth waiting for according to many of the regular anglers.

I really had no idea as to where to fish. I spent a few hours walking round the lake but didn't really see much. In the end I opted for the pegs on the same side as Brasenose lake. this is apparently fishing in the Smiths side of the lake. I choose here because there was less anglers around so it gave me more water to choose when casting out my rigs.

6pm: After using the marker rod I had found that there was a ton of weed present in the middle parts of the smith lake. This weed was very dense and almost impractical to present a bait in it. I decided I would place rigs just before where the heavy weed started.

By 6 oclock I had all three rods set up and cast out at different angles in front of the weed beds. Two rigs on boilies (pineapple) and another rig on sweetcorn. I let the rigs settle, then spodded out particle bait made up of hemp, tares and corn.

8pm: As it started to get dark I could see something was happening near my bait at about 60 yards out. Something was disturbing the bottom of the lake, and I was sitting watching patiently ready for the alarm to fire off. I waited and waited but nothing came of it.

11pm: It was completely dark now and I still hadn't caught yet. Suddenly, the left rod bleeped once, and then again 20 seconds later, was it a take?

I waited a little longer and there it went again, another single bleep. I started to believe that it may have been a carp taking my hook bait but then sat there trying to get rid of the rig. Another few minutes later the bobbins started to climb up slowly. I got to the rod and it had risen by about an inch and was still moving, I decided to strike it. Yes, I was in!

The fish suddenly woke up and raced off along the weed bed to the right. I immediately turned the fish just in case it was running to a known snag. Within a few minutes it turned and started to come towards me. Something wasn't right as it was coming in too quickly and easily. But to my relief, it came in and I slipped the net under a beautiful mirror carp which tipped the scales to just over 23 pounds!.

8am: There was no more action during the whole night. I got up early to reset the rigs, but before casting in I could see signs of fish showing over the opposite bank. this was way past the weed bed. So I placed 4 pieces of sweetcorn on the hook and cast a rod towards the showing fish. Corn is so much better for casting further distances because it is a small bait and causes less drag in flight. I left the rig there for 20 minutes but now fish where showing 20 yards to the right of the rig. I reeled in another rod and set it up the same before casting it to the new area where the fish was showing. Again, no joy 20 minutes later with more fish showing 40 yards to the right and closer into the small bay at the back of Hardwick's and Smith lake. I cast once more to showing fish, and this time within ten minutes in went. Unfortunately, the fish swam straight into a cluster of weed where it stayed solid. I tried to pull it free but didn't want to lose the fish. i decided to drop the rod on the pod and slacken the line off, but I did this very quickly in the belief that the fish may think the line snapped.

9am: An hour had past and the fish started toi move again. I lifted the rod and it was out! Great! I quickly turned the fish towards me and reeled it in fairly quickly. I fought all the way, but luckily it wasn't anything big and eventually I netted a small common about 11 pounds. Not big but at least it was another Hardwick original carp.

2pm: There was no more signs of fish out on the lake and I had started to believe the fish had moved on towards the Hardwick section on the lake. With no time to move I decided to see things through on this bank. I decided to try out my fake weed rig idea. Surely it would look great positioned next to the big weed bed.

5pm: No more takes by 5pm. I really did realise that was going to be it for my luck. The last hour I tried using very slow-sinking boilies with long hooklinks and cast them into the weed. This might just produce a huge Hardwick's Common.

6pm: No more takes during my stay so I decided to pack up and try again in another few weeks.

All in all, my fishing trip to Hardwicks lake in Oxford was enjoyable, with a lovely twenty pound carp on my first session I was very pleased.