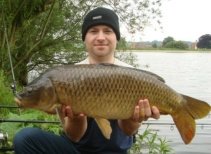 After finding Pool Hall fishery in the middle of huge fields, I realised it was a nice, picturesque and quiet area where I would be very relaxed. I do like fishing these medium sized waters that hold a load of twenty pound carp. The majority of the carp in Poolhall's specimen lake are commons, and these are often the best fighting carp to catch if you want some good sport. The lake doesn't hold any thirties at the time of writing but, the bailiff assured me that they would introduce some later in the year. Although, the lake does hold a fair few catfish that weigh up to 40 pounds, so at least there should be some good fight if I hit into one of them!

I was informed by a regular to Pool Hall that peg number 1 is one of the best swims for catching the carp. Apparently, the fish patrol up and down the damn wall regularly during the day. After some thought though, I decided to fish peg 3 in order to give me more options. I did like the reed bushes on the opposite bank and it wasn't that far so I could easily cast to them, even with a PVA bag. I could also cast to the wall if peg number 1 remained empty.

6pm: Rather than setting up the rods immediately, I decided to get the bait in quickly to give the fish time to find it. Pool Hall fishery allows bait boats on the lakes so I brought mine to allow me to get a large amount of bait out in the swim quickly. I very rarely use bait boats to take out rigs, I prefer to use them just for baiting up with little disturbance. So off went the boat to drop 12 kilos of particles by the reed beds on a silt bed opposite my swim. Now I had a nice big bed of bait to work off. I like a heavy baiting tactic on new lakes in the spring or summer time as I feel it gives me more chance of producing some good fish.

8pm: A few knocks on the middle rod which was on the baited area. No takes for 3 hours. So I tried changing the rig set up for a helicopter type. These tend to work better on deep silt patches as the lead is allowed to sink further into the silt without ruining the presentation of the hooklink and bait. I left 2 rods out with this system on it for more than 3 hours and no takes. Maybe I need to give the bed of bait more time. 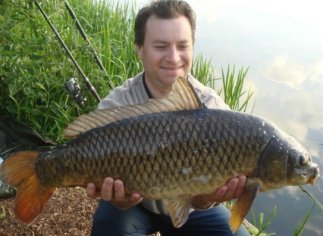 Another nice common carp caught from the specimen lake at poolhall

9am: With no action during the whole first day, I decided to try using PVA bags, but casting them 6 feet off the heavy baited area. If the carp in Pool Hall are spooked by big baited areas then they may be tempted to take smaller patches a few feet off the area.

10.30am: Yes, it worked!  The right rods screamed off and I was in at last. My god, this fish doesn't like being hooked. The fish wouldn't stop, it took lot of line off the reel as it raced away to the right. Well, at least it was in clear water. Poolhall specimen lake has lots of pot beds scattered around the margin areas of the swims. Apparently, these are very thick and once the carp dive into them you sometimes have to go into the water to get them out!

I was lucky and managed to steer the fish away from the pot bed to my right. I landed a common carp after 15 minutes of fighting. The common weighed 14 pounds 4 ounces.

2pm: It had been quiet for a few hours after my first common carp. I had tried several different fishing tactics but nothing seemed to tempt these fish onto the hook baits. I had continued to fish way off the baited patch in the hope that no end tackle present would allow the fish to get their heads down on the bait and help to build up some confidence in the feeding. Sure enough, I started to see signs of feeding carp on my heavy bait patch. I immediately reeled in one of the rods and cast it out onto the bait spot. Within 5 minutes I was in again with a hook bait of hemp set up using bogey paste to mount it. The fish kited to the right like the last one but it pulled out within 30 seconds of playing it. Ah! It may have been my fault for using a smaller hook. My thinking was to conceal as much end tackle as possible because the water is very clear.

8pm: No more action was seen throughout the rest of the day. I had tried numerous other baiting tactics to encourage the fish into feeding but it just wasn't working that day.

7am: With no more action during the whole night, I decided to go back to fishing off the baited area, but still keeping it close to the loose particle feed. At 7.30am I finally had another single-tone screamer. Again the fish kited to the right and took tons of line. I managed to get it under control and within ten minutes I pulled a fish into the landing net, another common!

This common weighed 13 pounds 14 ounces. Not bad but I wanted a twenty!

9am: At this stage in the session it's all gone quiet again. A regular came round asking how I was doing. He informed me that all the carp was over the other side of the lake and he was setting up over there. I decided to wait it out in peg 4 because of the amount of bait that had gone in.

Within 30 minutes of him setting up he was calling me over to help weigh a fish, it was the biggest catfish in the lake - over 38 pounds!

2pm: The guy opposite continued to catch 2 more carp on the same day. He was right about following the fish at Pool Hall fishery. Maybe I'll try that tactic on my next trip down there!

All in all, Poolhall fishery is a lovely place to fish in the West Midlands. It's peaceful and doesn't seem to get busy during the week. I would definitely recommend these lakes, and even more so if they manage to introduce some big thirties!