Barston lakes is in Solihull area of the West Midlands and in set in the middle of a golf course. I had heard many reports on Barston lake stating that it was a great lake to out new ideas and practice your carp fishing. This is a very popular lake, especially at the weekends where it'll be hard to find a spare peg in the summer months. The roadside bank is especially popular as you can drive right up to the swim and unload. this is very convenient for short fishing sessions. Barston lake is also quite popular with match fishing anglers as the water contains numerous other fish species such as tench, bream roach and perch.

The fish stock is high, with many thousands of small common and mirror carp to catch. The lake record is just over thirty pounds but this was reported a few years ago, and I personally would be surprised if there was still a thirty pound carp in Barston lake. However, there is still supposed to be a fair few twenty pound fish to go for.

The swim I chose was number 38. This was right down the father end of the lake where the bank goes up to slightly higher ground. I decided to fish by the water sprinkler that had not long been fixed in the middle of the lake. I felt that this could act a a distant marker, plus if they do switch it on during my stay it may attract more carp into the area.

6pm: One good thing about Barston is they allow bait boats. I do like to use these just got get out plenty of bait quickly and without much disturbance. I thought a big bed of bait might be a good way to fish Barston as I think many regulars tend to go with spodding or using bags. I felt a huge bed of bait would be different and help attract huge numbers of the smaller carp into the swim. Then, hopefully, the site of many small carp on a feeding frenzy would bring in the bigger fish. I would then position my rigs on the outer section of the bed of bait.

8pm: Within the first hour of fishing I was into a carp. this rig had sweetcorn on the hook, one of my favourite baits for catching big carp. The run was fast and immediate, and the fish raced away at unbelievable speed. After 5 minutes I had an carp of about 8 pounds on the bank. Over the following hour I had many more takes resulting in numerous small carp from 2 pounds up to 14 pounds in the landing net. The very last run of the day produced a lovely common which tipped the scales to 18 pounds, although it did look bigger due to its length, and at first I thought it could top twenty pounds. The photo is above.

11pm: The runs had now stopped, although I was certain the fish was still feeding. there was bubbles coming up everywhere under the moon light, and when I threw in some particles in the margins, fish was onto it within minutes. I continued to work at producing a bite but nothing all night. 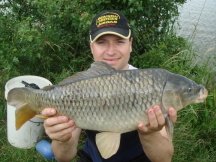 8am: All 3 rods were recast back onto and on the outer edges of the baited area. One rig had sweetcorn, one had 10mm cherry boilies and the third rod had small pellet on the hook. I could see fish movement all over the place, the lake was full of carp!

Within minutes I was back into runs. In a matter of a few hours it almost turned into a fish a chuck. The carp had really come onto my heavily baited area, and it didn't matter what type of rig or what bait I cast out, the rod would be screaming off within minutes. By ten o'clock I'd had another 8 carp, all were commons and under ten pounds in weight. 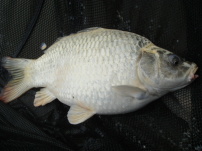 11am: By this time it had got so hectic that I wasn't getting time to bait up a rig before another rod was off. I had a common on the middle rod, placed the fish back into the water and whilst I was re-baiting the rig, the left rod went off. I had just landed another common and whilst the fish was still in the net the right rod screamed into action! I eventually had 2 common carp in the net at the same time.

1pm: The action was so crazy that I had reduced it to 2 rods in the water at one time. If there was a slow period for ten minutes I would just set the spare rod up ready to cast immediately. This saved me some time when I had landed a fish I just picked up the spare rod and immediately cast it into the same spot. Then went to attend the fish in the net.

5pm: At this stage I started catching a few tench and bream so I decided to try using much bigger hook baits. I wanted to see if this could help me catch the bigger carp of upper doubles and beyond. For the boilies, I went for 18mm strawberry. I continued to use sweetcorn on the other rod but I threaded on 5 pieces, and these were those huge kernels of corn which I had purchased in France one year. This didn't work as well, and the runs reduced down but, it did stop the tench and bream from biting.

8pm: I tried using luncheon meat and Peperami on the hook, and this did produce some good runs once more. Five more carp came off this bait and one was a mirror at last!

10.30pm: By this time the runs has stopped and I pulled the rod into the margins for the night. Sometimes I do prefer to rest parts of a swim to give the carp chance for a free feeding session. I feel this often builds up their confidence to come back the next day and continue feeding.

6am: With a new day ahead the wind had dropped and the water was much calmer than previous days. I thought that maybe the weather change would affect the fishing at Barston lakes. I placed the rigs back into the baited area and within an hour I had landed another 12 pound common carp. Here we go again!

9am: At this stage I had caught another 6 carp, all great-fighting commons but none were doubles this time. I continued to be plagued with the small stock fish. until about ten o'clock when I caught a lovely ghost carp. It was only about 3 or 4 pounds but what a beauty! Apparently there are quite a few ghostie carp in Barston Lakes.

The last day continued to produce numerous more carp. I think I had over 40 carp by the end of the carp fishing session. This trip was a very enjoyable fishing session at Barston Lakes. I would definitely recommend fishing for carp at barston.