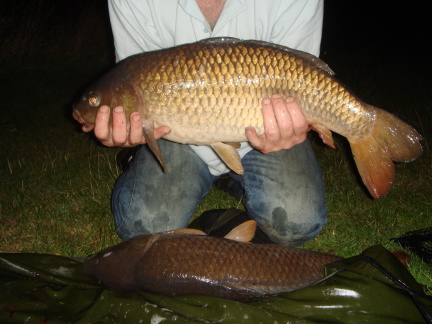 Carp have numerous sharp senses which helps them sort out the dangerous baits & rigs!

Like humans, carp are dependent upon their senses when it comes to food. Carp can smell, taste and see the food that they plan to eat. They have a highly developed olfactory system that allows them to sense any dissolved substance in the water. The lining of their mouths contains chemically sensitive cells that allow it to determine whether food is good or bad. The carp can see by using both eyes. However, if an item is immediately in front of and below its mouth, the carp relies on its barbuls’ sense of touch and taste to detect items.

Do Carp Stink? No, but they do Smell!

Carp can smell food items in the water. In an instant, their brain recognizes the smell and determines if it is edible. Experiments have shown that carp are able to recognize the smell of amino acids and other smells emitted by bloodworms, crayfish, and aquatic plants. Green-lipped mussel extract, kelp extract, liver powder and molasses contain sucrose and amino acids, which the carp has evolved to recognise as having nutritional value. If the bait does not contain these molecules, the carp will not take it. Negative associations with the smell, such as certain foods are unsafe because they contained a hook in the past, also affect the fish’s willingness to eat.

Do Carp have Good Taste?

In addition to their keen sense of smell, carp have an excellent sense of taste. The lining of their mouths have chemically sensitive cells that help it determine if the food is good or bad. Carp also have taste buds on their barbules, pectoral and pelvic fins, underneath their head and along the length of their body. These allow it to more accurately pinpoint sources of food. When a carp smells bloodworm, for example, in a silt bed, it sucks the silt and other detritus into its mouth. The palatal taste organ on the top of the mouth traps the food against the bottom of the mouth. Non-food items are expelled through the gills. Larger items are spat out. Approximately 97% of what the carp takes in is ejected. What remains is crushed by the pharyngeal teeth at the back of the mouth. These are aligned in three rows on each side of the mouth, with three teeth in the innermost row and one tooth each in the two outer rows.

There are differences in opinion as to what carp find tasteful. Some have suggested that carp love boilies, bread crust, meat baits, fruity flavours, and stilton cheese. The best items are those that either emit favourable smells or contain ingredients which mimic them. Boilies containing natural attractors, such as green lipped mussel extract or kelp extract, and a good quality protein, such as fishmeal, will attract more fish than other baits. Some anglers use peanuts. While peanuts contain lipids, sugars and amino acids, these do not mimic the natural foods carp like. Dean Towey has developed his own recipe for attractive bait. It includes white fishmeal, full fat soya flour (the binder), lactalbumin, rennet casein, robin red and seaweed extract. Matt Hayes prefers the maize and boilie approach, but adds that an angler can catch more carp if he/she also feeds in some hemp while fishing.

Some anglers boast about the effectiveness of flavoured imitation baits. When boilies fail to attract carp, artificial corn will usually work. One advantage to using imitations, such as fake corn, is that smaller species of fish will not nibble it away. Zoom Carp Snacks have been used successfully by many anglers. Zoom also has a range of Jointed Snacks, which consist of multiple pieces joined together with a latex hair. The angler need only push a hook through a notch on the hair and pull the hair around to the rear of the shank. The snacks come in honey, vanilla, strawberry and chocolate flavours.

Look out! The Carp are Watching!

Aside from being able to smell and taste their prey, carp can see it. The carp’s eyes are more sensitive than ours. They can see in lower light levels and can also detect ultraviolet light. Carp use both eyes to focus and see accurately. They have a blind spot right in front of and below their mouths. At very close range, they depend on their barbuls’ sense of touch and taste to detect food. Carp eyes are very sensitive above the water to changes in light and movement. Anglers should wear camouflage clothing to avoid detection by the carp. To avoid being spotted, it is best to approach carp from behind. When fishing, the angler should place his bait close to a feeding carp's nose and animate it carefully. Often, if a carp hears unusual noises or sees a line, it will stop feeding, and swim away.

Carp have highly effective ears which can detect frequencies from 60 to 6,000 Hz. They are located inside its body on either side of the head, just above the gills, at the rear of the brain. The ears feature a fluid filled sac with tiny hairs set on an ear bone (the otolith), which detect vibrations in the water. They are connected by a set of bones (the Weberian Apparatus) to the swim bladder, which acts as an amplifier. When the wind blows, it causes the angler’s line to vibrate. The carp are able to “hear” the vibrations and move towards the hook and bait.

Okay, you’re using the right bait and you’re in the right location to catch carp, but the carp aren’t biting. What’s happening?

Carps have a large brain and they can remember things that happen to them. They also have a natural instinct that tells them to avoid certain foods, smells, objects and locations. When you add in instinct to acute eyesight, sense of smell, and sense of taste, you have an animal who can decide for itself whether to go after your bait or leave it be. Based on its experiences, the carp may decide to ignore you. You can spread your favourite mix where the carp are and watch them gobble up the mix but refuse to take your hook bait. Somehow they know there’s a trap being set for them. Also a hooked or injured carp  may release a stress odour that tells other carp to run away or hide.

That Time of the Year

There is much discussion as to the impact of the weather and the season of the year has on the carp’s senses. Carp gorge themselves on protein in the autumn time. Cold fronts intensify their feeding instincts with the onset of cooler air and water. In the summer, carp try to conserve energy. Fish are always more aggressive when the wind is blowing, oxygen levels increase, light penetration of the water is decreased, and plankton is abundant. Fishing on still, high pressure days is difficult, but not impossible. A good rule of thumb is that if the wind's blowing, fish the windward shore. If it's flat calm, fish cover.

There are other anglers who don’t put stock in the weather or the seasons. One angler wrote on the Carp Anglers Group Forum: All this HUBUB about the high or low pressure is really not as hard to get a handle on as most might believe. The answer is simple. “If the cows are on their feet and grazing, go fishing. If the cows are lying on the ground chewing the cud, stay home.” Probably makes just as much sense as anything else.

Effects of Wind on Under Water & Carp

Best Way to Cast to a Jumping Carp

How Long Should The Hair Rig Length

How to Camouflage Rig Components

How to Stop Lead Sinking in Silt

Fishing for Massive Carp in Springtime

How to Catch Huge Carp on New Waters

Problems when Fishing for Carp in Silt Bed

Roam Method Fishing for Carp Which is Best?