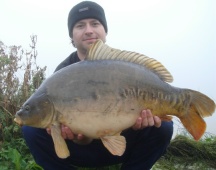 24 Pound Mirror caught at Bradley's Lake off the point swim

After arriving at Bradley's lake I immediately saw that "the point" swim was available, so I quickly moved in and set up ready for my 3 day fishing session. I have witnessed a few 30+ pound carp being caught from this swim earlier in the year, so I thought it would probably be the best place to target the larger carp in the lake. Bradley's lake is huge, well over 100 acres of water, but there's one bank angler's are not allowed to fish due to the location of holiday homes. Also, from my short experience on the lake, I find it difficult to locate the fish quickly due to the frequent choppy water across the whole lake. I feel it is therefore essential to find a swim that gives more options by having a huge amount of water to target.

I remembered a local angler informing me of a silt patch out in front of the swim at around 80 yards distance. I got out the marker rod and looked to find exactly where the silt bed is located. Within an hour I had located it and dropped about ten kilos of bait by the marker.

4pm: I resisted casting out a fishing rig frequently onto the baited area for a few hours. I wanted to give the carp chance to move in on the bait and feed freely without any angling pressure from my lines. Instead, I cast all 3 rig in different locations but at least 30 yards away from the bait I had took out using a bait boat.

7.pm: I was using pop-ups on 2 of the rods and a single bottom bait on the other single rod. At about 7.10pm I noticed a carp role to the right in line with the third peg on the opposite side. The fish was about 60 yards out, I immediately pulled in a rod and prepared it for a re-cast. It landed about 5 yards from where the fish had rolled, good result. Within 30 minutes the rod was off, a take!

The fish pulled to the left hard as I fought to keep it up and away from the thick weed beds scattered around Bradley's. I was praying the lead clip would do its work and drop the lead weight. Yes, the fish was up near the surface, the clip had released the lead. I felt I had complete control until the crafty carp ran through one of my other lines. I quickly lifted the other rod up and threaded my rod under it. Yes, I was free again!

After about 15 minutes I pulled a lovely twenty pound mirror into the net, great start! The carp tipped the scales at just over 24 pounds. My first Bradley twenty!

11pm: All had gone quiet with no more takes. I had still resisted placing a rig on my baited area. I wanted to try and leave the area until the next day. I believe the carp in Bradley's take time to come onto the bait, so I wanted to give them a reason to stay in the area by giving them a free feeding chance. I wanted them to get their heads down on the bait comfortably and with any end tackle and line in the area they may not stay around for long. If any fish came in on the bait during the morning they would have a free feed and that may encourage them to remain in the area for a few days. That was my plan anyway!

1am: I left the rigs close in the margins for the night, maybe hoping I might get a take if carp patrol the margins during the night or very early morning.

6am: Woken to a screaming run!! Yippee!!

Ran out the bivvy and pulled into the fish, ah no, it's a Flaming Swan!! The swans on Bradley's seem to be a nightmare. I always place the tips into the water but they still manage to tangle up in the lines! Lucky for me the line pulled off from its back but the damn thing disturbed my sleep!

8am: Right, I could see some signs from my baited area, so time to try it out with a single rod. I threw out some whole boilies first to slightly disturb the fish so I could cast in my rig without spooking them completely. A little tip from the underwater fishing videos by Korda!

Within 20 minutes the rod was off, and I quickly netted a little stockie carp of about 8 pounds. On releasing it, I told him to go get daddy!

9am: More stockies from Bradley's keep taking my hook bait. These are not what I came for, but they are still good fun!

After 9 runs I netted 7 small stockies up to 11 pounds, ah well it's sport. Where are all the bigger carp that I know Bradley's holds? I was told by a regular that a thirty will often come out after catching numerous stockies, so I was still hopeful and kept topping up the baited area with my new spod mix. A concoction of hempseed, ground dry bread, liquidized bread, chick peas and black-eyed beans. All with added hot spices.

1pm: All had gone quiet in the swim with no more takes. I decided to pull the rods out of the baited area and let it rest in the hope that some of the bigger fish will be tempted back and get their heads down on the bait. I spodded 6 spod-fulls of mix every few hours until 5pm.

I roamed around different areas with single bait tactics, but no joy. The fish in Bradley's lake can seem to disappear within minutes.

6pm: I pushed on through the evening and night but, to my disappointment no more takes. However, I was going to stick to the plan no matter what.

6am: The left hand rod raced off at 6.10am, another carp. Maybe this would be another productive day. Unfortunately, the lead didn't come out of the clip as the fish hit the weed beds, I ended up losing the first carp of the day. It felt like a fairly good fish as well, although nothing special.

9am: Two re-casts later and the left hand rod was off again. This time the lead clip worked well and another stockie was in the net within 5 minutes. I spodded out some more bait to top up and re-cast the rigs in the same spot, about 60 yards to the left of the point and in line with the boathouse.

1pm: The silt patch out at distance wasn't producing anything so far. But I was hopeful and believed it was worth keeping at least one rig on the spot. After several more hours still no action.

5pm: After very little action, I decided to try something different on one of the rods. I changed the bait to a single small pellet, and placed it in a PVA bag full of just dark coloured pellets. I whacked the bag out into a weed bed at around 70 yards distance and to the right of the point's swim.

6pm: The PVA bag produced a slow run, I thought it might be a big fish as I ran to the rod. However, after ten minutes I pulled in another stockie of about 9 pounds. I continued with this fishing tactic for a few more hours and had one more stockie about 6 pounds.

Bradley's lake in Gloucester is a great water, full of carp and with a fair few big monster thirties. However, sometimes you may need to wade through a lot of the smaller stockie carp before hitting into the big stuff. All in all, it's worth the trip!