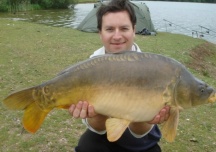 Bradley Lake Gloucester and another Mid-double Carp caught on Boilies

This was my second trip to the huge Bradley lake in Gloucester's watermark complex, and this time my dad came along for a 3 day session. With a big South-Westerly wind blowing down the lake we decided to target the North end of the lake, and we set up on the "wood pool" bank. This was where I had fished previously, and with some previous knowledge of the swim from the first visit, I felt this would give me a head start. I knew where the clear patches were, plus I had caught numerous stockies from an area of the swim only a few weeks before.

We wanted to set up quickly as it looked like we were going to get some rain at some stage during the day. There was another angler fishing two pegs up from us and I has made the mistake of NOT speaking to this angler before setting up. He had been there for a few days and had not had any takes at all. He claimed he'd not even seen any fish moving for days. This just illustrates how important it is to speak to any anglers before starting a fishing session to try to get as much information about what the lake is fishing like at the time. Looking back I would have not fished in these pegs as it turned out to be a struggle. I think it was clearly a case of us in the wrong location. But this is how we all learn I suppose!

6pm: By this time we had both set up all 3 rods for the session. I was fishing on the same clear patch as the first trip to Bradley's lake. This was about 75 yards out in front and should have been slightly right to a buoy which was further out, however, the buoy had been moved by the boating people (I'm sure they hate us carpers!). Luckily I had forgot to unclip the marker line from when I previous used that swim and thus quickly found the patch without much disturbance to my swim.

10pm: We hadn't seen any signs of fish movement at all by ten o'clock. I decided to put out a load of bait like I did before, plus, if the strong winds and very choppy water did return, I would have enough bait out there to keep the fish returning, hopefully! Plus, my dad wasn't going to bait heavily, so I figured it would be a great test to see if heavy baiting or sparse baiting tactics was going to prove the best way to fish Bradley's lake.

Twenty kilos of bait later and still no signs of fish for both of us, but at least I was ready for the next few days.

12am: A quiet night with no takes so we decided to get our heads down and make an early start in the morning. During the night I could hear some carp crashing out further round to the right of "the point" swim, although, it was difficult to pinpoint exactly where.

No take during the night.

8am: We woke to a cold and dreary day. Maybe the rain and low air pressure would stir the fish into a feeding spell. Although, I didn't feel confident that there were many carp in the area, if so, surely one of us would have had some kind of action or seen something?

I continued to try out different rigs, changing the lengths of the hook links, experimenting with new materials and trying various baits. Nothing seemed to be working at this stage.

1pm: By this time the water had become very choppy as the winds picked up across the whole mass of the huge lake. I had a feeling that the conditions were not right for this fishing session, it had a blanking feel to it all, or maybe my own farther is a jinx and I need a new fishing partner!

I noticed that the small pool behind us looked much more inviting for a possible take. I knew nothing about this tiny water but figured I had nothing to lose by trying it for a few hours. So within minutes I had taken out one of the rods and prepared a rig for the small pool. I set up a bank stick just behind my bivvy with an alarm and cast in the rig with 4 pieces of sweetcorn on the hook. The water at Bradley's is very clear, but the small pool right next to it is dark it's not possible to see a carp even a few inches under the water.

2pm: Within 20 minutes I had a screaming run from the rod in the small pool. Great, some action at last! The fish tried to run towards the middle section of the pool where I felt as if the line was catching on something. I didn't risk it and started to pull the fish hard to turn it away from the potential snag. Within 10 minutes I had landed a nice mid-double mirror. It tipped the scales at 14 and half pounds. The photo is above.

After seeing the fish, my dad immediately dragged in one of his rods and cast it by the tiny island in the small pool. By this time we was keen to gain any type of action, even if it meant fishing another lake!

3pm: Within 30 minutes my dads rod sprung into action, almost dragging the rod out of the rest. He pulled into the fish and the rod bent round very nicely. With a smile on his face he stated it feels like a good fish!

After playing it for a few minutes I noticed it was running towards that snaggy area I felt when playing mine fish. But before I could explain about the potential snag, his line was caught and the fish was snagged up. We tried to gently pull it out, and then he placed the rod on the rest and opened the bail arm. Eventually the fish came free and my dad had a good upper double on the bank.

6pm: The action on the small pool had slowed by this time but we kept trying out different tactics. Around 6.30 the bailiff came round to check the permits and spotted our rods in the small pool. He informed us that we shouldn't be fishing that pool as the permits don't cover that water - Ooops! We didn't know, so that was an end to our little bit of fun for the day, ah well, rules are rules I suppose.

9pm: With all 3 rods back in the main Bradley's lake I placed them all on the baited spot in the hope that carp would eventually come onto my bait. No such luck, I'm afraid to report. I continued to blank on the main lake for this session.

8am: The last day and the only bit of action was from my dad's left rod. He had a couple of little knocks and he struck on them which brought him a nice tench of about 6 pounds. no more takes for any of us, even the other angler close by!

12pm: By this time it was all very quiet with no action since the previous day. Maybe the carp just hadn't got round to that part of the lake for the time we was there. After all, Bradley's is a huge water, with some of the bank unavailable to anglers. The fish could be just anywhere. With this in mind, we decided to pack up and try again within the next month!