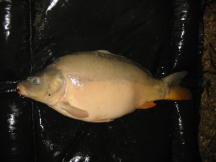 I first arrived at Linear fisheries at 12pm on the 6th November 2007. I quickly decided to target the carp in the St Johns Lake of the complex as I had heard news of large fish coming out over the last weekend. Maybe the carp in this lake was down on the bottom and feeding hard. If this was so, it would give me the chance to catch carp using my best carp rigs presented with stringers of 3 or 4 free boilies.

I chose the peg on the westerly bank of the lake, where the lake goes narrow. I felt I could target any fish which move from one area of the lake to the other, especially if they follow the wind. A strong wind had started to blow hard towards the northern bank. This means a south-westerly wind was starting to push towards the north end of the lake.

All 3 rods was set up by 3pm. I decided to use a tactic of little bait on each rod as the water was quite cold. I wanted to figure out where the fish may hold up, and because the opposite bank was very quiet, I thought casting towards the other side would be a good bet to find the location of the carp in St Johns Lake.

5pm: After watching the water for 2 hours, I didn’t see much movement of fish in my area. I decided to try out a different carp fishing rig altogether. I used a very slow sinking balanced boilies on a very long hook link of mono fishing line. I knew the fish was over the other side after seeing signs of fish movements an hour before. I tried this fishing tactic for a few hours, but with no takes I decided to set up the rods for the night session.

9pm: I placed 2 carp fishing rigs in the centre area of the lake. I had found a silt bed earlier in the day so I placed the rigs in this area. I though it would be best to leave the rods there over night until the morning when I could look for carp movement around my swim. I had a take on the middle rod about 3am and as I struck into the fish it snagged the line up and the fish pulled out before I could gain control again.

6am: At first light I could see carp crashing out on the far bank opposite to my swim. I immediately cast out new rigs; one with a pop up bait, the other with a balanced slow sinking bottom bait. After 15 minutes the slow sinker boilie produced the take. I pulled into the fish and within 15 minutes an 18 pound common was on the bank. 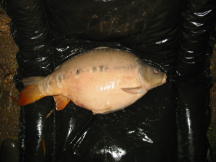 10am: No more visible carp showing in the swim. A south-westerly wind had built up and the cloud cover was stopping the warmth of the sun getting to the water. I decided to try out a zig rig on the third, roaming rod. This didn’t produce any takes for the rest of the morning.

2pm: As there were no more movements I decided to take the rods out of the water in order to rest the swim for the evening session. I baited up in specific areas where carp are known to patrol. I prepared new fishing rigs for the next cast.

6pm: As the light drew to a close, I prepared all 3 rods to be cast out in featured areas in the swim. After casting out 2 of the rods, I seen a big carp jump out of the water three-quarters across the swim. At this point I changed my mind and placed the last rig towards the showing fish for the night.

7pm: The rod cast to the showing fish produced the next take. After only 5 minutes fight, I had a 21 pound mirror on the bank. A great result but, unfortunately my camera had broken when I dropped it!

6am: None of the other rods produced takes during the night.

9am: The left hand rod had several bleeps over the course of few hours; eventually I struck and held a fish. Unfortunately, I lost this carp at the net. By the looks of it, it weighed roughly 15 pound.

6pm: After receiving no more takes, I decided to pack up.

St Johns is a great place to fish for big carp. Although, you should be aware that with the angling pressure I think you’ll need to bring some new fishing tactics if you want to catch the bigger monsters present in the lake!