Roaming for Carp or Heavy Baiting Methods:
Which is best & why?

Which fishing approach to use: “Heavy baiting & waiting” or roaming for bites?

When we fish for carp it can be easy to sit in our comfort zone and NOT drift away from our usual approach to carp fishing methods. There are many anglers that prefer to sit inside the bivvy and wait for the carp to come to them – I’m one of these guys for 80% of my fishing sessions! And yes, this way of fishing is fine plus, if it works more often then that’s great. There’s also some anglers that travel light and prefer to be more mobile in their approach to fishing, again if this works and catches more carp then it’s another fine carp fishing tactic.

However, the question that should be asked is which fishing method would best suit what fishing situation?

Firstly, I don’t believe this is an easy question to answer as it really depends on numerous other factors. It also relies on an angler’s ability to produce the best detailed tactics if he was to change his overall fishing approach. Some anglers may not be good at roaming to catch carp; they could make simple mistakes like being too noisy when approaching unseen fish.

Despite these potential problems I will endeavour to give some general answers that I feel are good points to consider before choosing either angling methods. 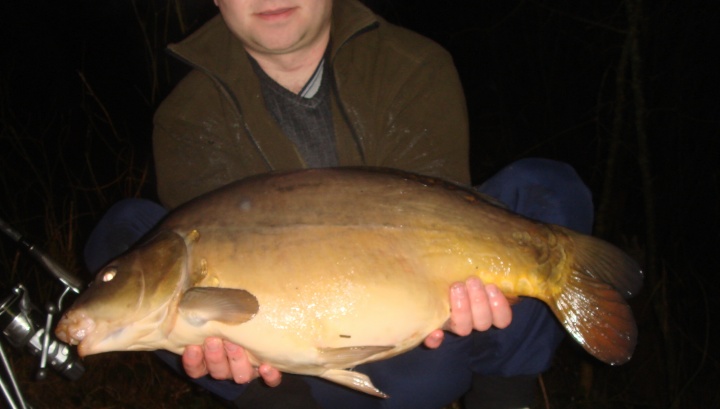 A sixteen pound carp caught at night. I used one rod to roam for fish using single bright pop-up boilies

I feel that roaming maybe a fishing tactic best suited when it’s very cold, or maybe even in extremely hot conditions. When it’s cold, carp don’t move around the lake as much, plus it’s quite common for them to shoal up tightly in the winter – a bit like the penguins do to keep warm in the artic storms. Therefore, you don’t want to be set up in a completely different area to where the fish are located in tight groups. By roaming around the lake looking for signs or potential places to place a rig, you’ll have more chance to drop onto some fish at some point during the whole fishing session.

During the very hot days in the summer months, the carp may hold up in areas where they can feel safe. They’ll often be seen just under the surface of the water where they’ll cruise around all day. Obviously, location is important here but you may need to roam around the lake to find hungry shoals which are prepared to feed rather than spending time enticing a specific fish that probably won’t feed for hours. If you remain in one area trying to get a shoal of carp to feed on floating bait, but they don’t seem interested, then it’s probably best to move on and try another swim where cruising fish may want to feed.

I also feel that a roaming fishing methods could be a good tactic if the weather has been chopping and changing lots. This is because it’ll be very hard to analyze where the fish will be held up, unless you have good knowledge of the lake you intend to fish. The consistent changes in weather patterns mean it’ll be difficult to know exactly where the fish will be holding up and they could be in numerous different places around the lake. It will also depend on the time of year, as carp will probably change their priorities depending on what is most important to them at that time. For example, they may usually go for the warmest parts of the lake, but if the oxygen levels in the water are very low, then they’ll probably prefer to find areas where the oxygen concentration is higher, this could mean they’ll follow the wind, even if it’s a cold easterly wind direction. If in the winter, the oxygen is at adequate levels, then they may prioritize to find warm thermals in the water body, and this could explain why the shallow waters of the lake are productive for catches during an early winter’s sunny morning.

When roaming for carp it may be best to use single hook bait tactics, or with a few stringer boilies. This could help to encourage them to home in on your hookbait boilie immediately.

During an average summer day, and especially when there are strong westerly winds blowing across the lake, it could be the best time to bait heavily and stay in the same swim for longer periods. Carp will move around more when the water is warm and has good oxygen levels. With more moving fish, it may sound like the best time to use roaming tactics, but I believe heavy baiting is best because when they eventually drop onto your heavy baited area, they’ll be more inclined to remain there for longer periods, and they’re likely to return regularly. Now, this is a good situation to be in because you can keep trying different rigs and/or bait presentations until you find one that works well and blends in nicely on the bottom. Plus, if they do move for a period, you’ll have time to set the best rig traps ready for when they return to the baited spots.

I will say though, it may not be a good idea to just bait any old spot, it would be best to do some homework first and find a swim that is either known as a hotspot, or if it’s a new area you wish to try out, make sure the fish do visit that general area of the lake. The lake bed should also be ok for a good bait presentation, you want to avoid smelly silt, heavy snags or mussel beds that can cause fish losses.

I have heard many anglers criticize the use of heavy baiting tactics by saying that the big carp may spook off them, but who said you have to place rigs on the free bait? The heavy bait could just be used to attract fish into your swim, but then used as a decoy for the bigger fish by placing clusters of small PVA bag items with a rig hidden inside.

One good tip is to find out where in the lake the bigger carp have been caught from, and at what time of year. During the same month or when the weather conditions are similar, start to bait the area heavily. Many big carp tend to be habitual and follow the same feeding patterns for years, so repeating a past angler’s successful location is a good way to target the bigger fish in the lake. Even better is if you can pre-bait the spot for a month or so before actually fishing the swim.

When Not to Bait Heavily

Maybe a heavy baiting fishing approach should be avoided on lakes with lots of natural food present. If the wiser carp have a choice between naturals or anglers bait they’ll probably feed on what they know to be safe.

I would think before heavy baiting on lakes with tons of weed present. When tackling lakes with lots of weed it’s probably best fishing for bites rather than using large beds of bait. Any lake with a good supply of naturals would probably do better when fishing with natural smelling boilies such as shrimp and bloodworm based flavours.

I would also make sure fish are feeding well before baiting heavy on any UK water. You don’t want to waste lots of bait if the fish are not feeding for whatever reason, especially if the conditions are just not right and the carp seem to have switched off from feeding!!

How Sharp Are A Carp's Senses, Do They Have Good Smell?

Will All Carp in a Lake Follow a Strong Wind?

How to Find out Areas & Routes Where Carp Patrol

How to Limit the Lead weight Sinking in Soft Silt

How to Camouflaging Rigs End Components

Tips on Why Some Carp Cannot be Caught

Setting Up The Chod Rig for Carp Fishing

Should I Place Bait Close to the bend of Hook?

How Long Should The Hair Rig Be When Making Rigs

Ways to Set Up Rigs to Limit Potential Tangles On Casting

Roam or bait & Wait, What do you think is best tactic?