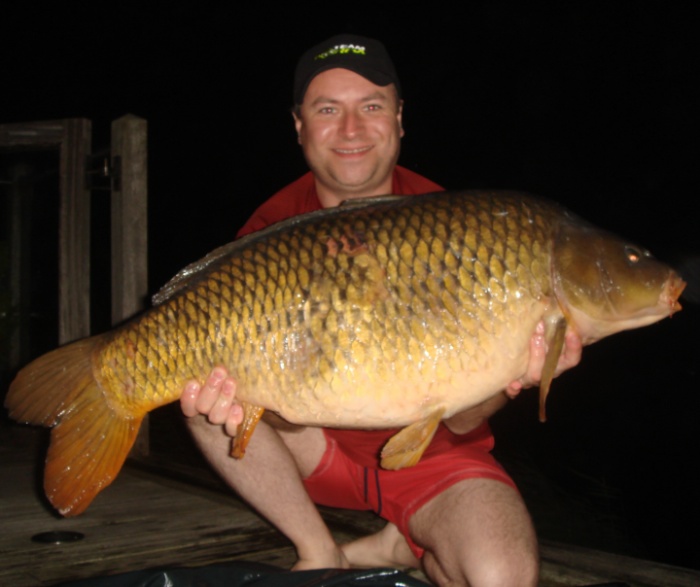 After entering gate 1 (off the Station Road) of Bradley's lake, I immediately noticed all the swims were empty and the wind was pushing up from the south west. I took my time to look for signs of fish movements all around the bay but the choppy water makes it difficult to see signs of carp movements.

I decided to set up on "the point" swim as this peg offers a huge proportion of the water. It gave me the options to roam around and still keep my eye out for any possible signs of carp during my stay.

I found the silt bed at around 80 yards out and dropped about 5 kilos of particle bait. This was made up of chick peas, pellets and hemp seed. I was also testing the Tackleden's Atlantic Heat boilies as I heard many other regulars was baiting up with other the previous few months. I chopped these boilies up and added the majority to my spod mix.

4pm: By 4 o'clock all 3 rods were set up. I had placed one rig on the silt patch at 80 yards, one on a clear gravel patch about 60 yards to the right, and the third rod was placed left heading towards the boat house in line with the big tree. All three rods was left out for roughly 2 hours.

7pm: With no takes or signs of any action I decided to use the 2 end rods of the pod to roam around the huge water to attempt to produce a take. I placed a pop-up rig out to the left again but this time let the rig drop gently down in between weed beds. The other rod was positioned towards the small bay area to my right. The water is generally a lot calmer here, so I placed a critically balanced fishing rig on the hook and placed it into a PVA bag along with some boilie chops. The first rod was left on the silt patch as this was where all the bait had been placed.

10pm: Not one take or any action at all! I decided to get the rods ready for the night. The carp at Bradley's often patrol the margins around the point, coming from the tree-lined pegs to the right from the small bay and through towards the left bay where they can sometimes be seen by the water outlet near the location of the very small pool. I placed a PVA bagged rig towards the drop-off ledge about 2 rod lengths out. This would be ready for any patrolling carp which may pass early in the morning. 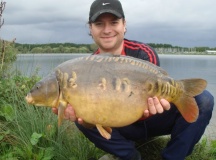 7am: The left rod placed at short range at the drop-off produced a screaming run. After pulling into the fish, it screamed off heading towards the thick weed beds further out to the right of the point. The fish hit the weeds but the lead clip set up worked well and the lead weight ejected. This made the fight much easier to control, and within ten minutes I had landed a lovely mirror weighing 17 pounds 2 ounces.

10am: I had left the rods in the same place for another few hours but this didn't produce any more takes. It seemed the fish had moved on, and with the strong wind pumping down the lake it was still very hard to see signs of carp.

1pm: I spodded out more bait to try to attempt some fish into the area. Within an hour I had a knock on the baited rod on the silty area at 80 yards. I gave it 15 minutes then placed out a few whole boilies onto the silt rig which had the chopped boilie. I cast out my left hand rod to place a rig with corn next to the other silt rig in the hope carp would be tempted to take a different bait.

2pm: An hour later the sweetcorn rig screamed into action, and within 5 minutes I had another carp into the net. Not much to shout about, just around the 5 pound mark. A fresh piece of corn was attached and placed back in the same spot.

3pm: More action! Again the sweetcorn produced another run, unfortunately another small mirror about 6 pounds. The carp seemed to have moved in on the baited spot but I was mainly catching the smaller stockie carp.

5pm: By this time I had another 2 smaller stockies from my heavy baited area on the silt patch. Not one of the last 4 fish was above 7 pounds, not even worth a photo!

1am: No more action as I moved into the final day at Bradley's lake. All 3 rods were now placed on the silt patch at 80 yards. I would give it another few hours before starting to roam with 2 rods looking for any type of take.

3am: The wind had dropped a little but all was still quiet around the swim. I pulled in 2 of the rods and re-baited with the Icelandic boilies from the Tackleden shop. I placed both rigs in the margins for the rest of the night, just where I had the 17 pound mirror. Hopefully, I would be woken with a loud screaming run in the morning, so off to bed keeping all nice and quiet.

9am: I woke up with no action at all. Maybe the fish had won this battle!