If you want to improve your catch rate when carp fishing on new lakes, then you must learn how to find those invisible features on the bottom of the lake bed. Finding underwater features such as weed beds, silt deposits, gravel patches and plateaux is very important because you need to use the right rig for the bottom surface. For example, it would be a lot harder to catch carp using an in-line lead system if you’re casting directly into deep weed. Feature finding is also important to discovering potential carp feeding hot spots, on the edge of silt deposits for instance, which tends to hold natural food. Feature findings can also help you feel for places where your rig will settle down on the bottom more effectively and not lay awkward so that the carp can easily see or feel the line.

Underwater feature finding is best achieved by using a marker float and a lead attached to the end of the line.

Using a marker float to translate the “feel” of a lake bed and understand the contours and type of bottom will take some practice. It may be best to master the technique in your spare time and not when you’re not actually fishing, because casting a marker float several times into a swim can spook off carp. After practice you’ll be able to find features within a few casts, thus reducing the chance of disturbing any carp feeding in the swim.

How to use the marker float 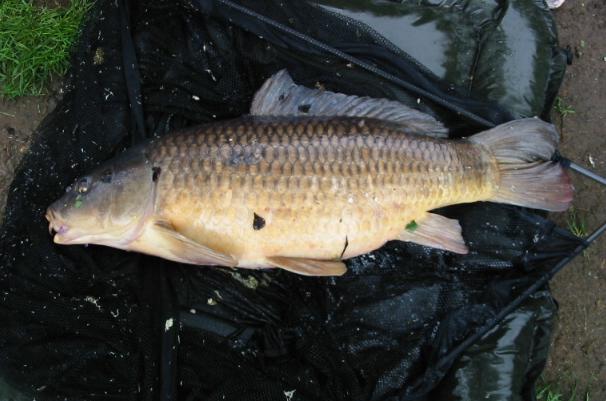 Feature finding means you're set up for fishing success!

Cast out your marker float and let the lead hit the bottom. With the rod pointing towards the lead reel in the line until you feel the float tighten up to the lead. Gently pull line from the reel, roughly a foot at a time. When the marker float pops up stop counting and this number plus the extra foot from the end of the stiff link will be an estimate of the depth of where you cast, remember the depth.

Continue by reeling the line until you feel the float tighten back down to the lead. Keeping the rod down gradually pull the tip of the rod to the side and drag the lead about two feet across the bottom of the lake, at the same time feel for vibrations and watch how the rod tip acts. You will feel a different vibration for every type of bottom and every feel will help you decipher what features the lead is resting on. Use the guide below to understand which vibrations best indicate the type of bottom

A good feature finding tactic is to place the finger tips of your reeling hand up the rod blank about two feet away from the reel, this will increase the feel of the vibrations as they come through from the lead and travel up towards the rod tip.

After dragging the lead every two to three feet test the depth again to see if there is any difference. Any change in depth will indicate a difference in the contours of the lake bed indicating a gulley, plateau or a gravel bar. The depth can be useful in indicating potential carp feeding hotspots. The bottom of a gulley, for example, may contain some silt deposits full of natural food, and placing a bait in this spot may produce numerous carp catches.

Be thorough and test the bottom of the lake bed every 2-3 feet and all the way into the margins looking for the water depth and type of bottom; whether gravel, silt, mud, clay, sand or weed. Once you understand what lies beneath the water of your swim you’ll be able to select the right type of rig.

After finding a feature that you’re confident may produce carp, stop reeling and let the marker float rise to the surface. Cast a hookbait close to one side of the float then throw in some free offerings around the marker float.

Now, before removing the marker, line it up with a prominent feature on the opposite side of the bank. This will help you to cast in the same direction each time you cast the marker out. Then place the line around the reel clip so that you always reach the correct distance when casting.

Which type of vibration indicates the composition of the lake bed?

Gravel beds often cause the rod tip to jerk positively, you’ll also feel violent taps through the rod. Make sure there is constant positive jerking and not just one or two as this could simply be a few stones scattered around a bed of sand or hard mud. With a bottom of gravel and silt the rod tip tends to alternate with a hard jerk then a soft feel.

With a gravel bar you may feel the violent taps, but the lead also seems hard to pull. This could be because you’re pulling the lead up the side of the gravel bar. If the lead starts to pull easier, then you have reached the top of the bar. When the line goes slack then the lead may be rolling down the other side of the bar. This can be a great feature for presenting a hookbait, especially at the foot of the bar where silt builds up.

On sand or fine gravel you’ll feel the lead tap along fairly easily in a steady motion, but maybe with a few jerks on the rod tip as the lead skitters across the bed. In this instance, the lead may be catching on small parts of fine gravel or slightly burying into soft parts of the sand. On smooth, hard sand the lead seems to glide across the bottom of the lake bed without any noticeable jerks on the rod tip just very frequent but slight vibrations.

On weed the rod tip will pull round hard and when applying pressure you’ll feel the lead pull out only a little at a time, sometimes like you’re pulling against a strong elastic. At this point it may be best to raise the rod high to allow the lead to skip over the weed rather than trying to drag it through the weed. With long, dense weed there will be a greater feel of resistance.

On mud, silt and other heavy bottom the lead tends to become buried and you may find it hard to pull the lead at first. When the lead releases you’ll see the rod tip jerk back hard, the lead may seem to stick again as it buries into the soft ground once more. A soft silt or mud bed often means the rod tip will pull round hard and you may believe the lead is snagged before it releases quickly, this is when the lead has buried down further into the bottom making it even harder to pull out. What you actually feel will ultimately depend on how hard the mud or silt is, and even how deep the silt is thus there can be no definite answer to how the rod tip or lead will act for all lakes. This is why practice will help you to become more accurate at determining the underwater features.

Once you master the art of feature finding you’ll be able to implement a similar technique on the actual fishing rod by feeling how the lead hits the bottom. Learn how to feel the lead down after casting.

How to Stalk methods for Catching Larger Target Carp

How to Attract The Big Carp in New Waters

How to Bait Up Effectively in Winter Cold Months

How Deep of Water Do Carp Prefer to Patrol in?

Roam to Catch Carp or Best to Bait Heavily

How Many Times Should I be casting out Rigs?

How to Catch Carp Never Caught Before

How to Deal With Crayfish Problems On New Waters