How Carp Swim:
An Exploration of Carp Movement

Like all fish, carp use a variety of fins and internal buoyancy features to manoeuvre their ways through the rivers, lakes and ponds that they inhabit. European carp (Cyprinus carpio) way up to 80 pounds and can grow to over 5 feet in length. It takes muscle to move all of that carp! Specifically, carp utilize an intricate system of muscle blocks to power their fins. 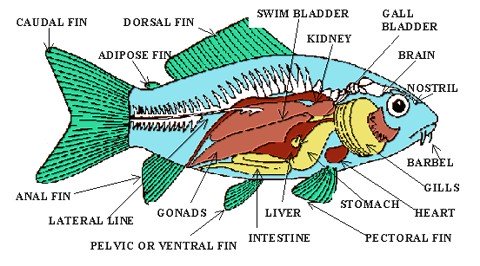 As these blocks of muscle, called myomeres, relax and contract alternately on each side of the fish, beginning at the head and ending at the tail, the various fins of the carp propel it forward. This occurs as multiple waves are created alongside of the fish. The end part of each individual wave creates thrust against the surrounding water and propels the fish into moving forwards through the water.

Let's examine the fins of the carp:

How to tell the difference between a male and female carp:

It's not really that easy to do - unless you know what to look for. Firstly, the male carp has well-developed muscles a around the pelvic fin; females do not. During spawning seasons, males will develop tubercles (white bumps) on their heads and gill plates. Also, females are significantly fatter during this time because they are carrying lots of eggs.

Carp Movements through Water will change depending on the temperature!