Here is a commonly used catfish float rig. A few years back it was used regularly by many French anglers, and it is still supposed to be an effective float rig for catching big catfish! 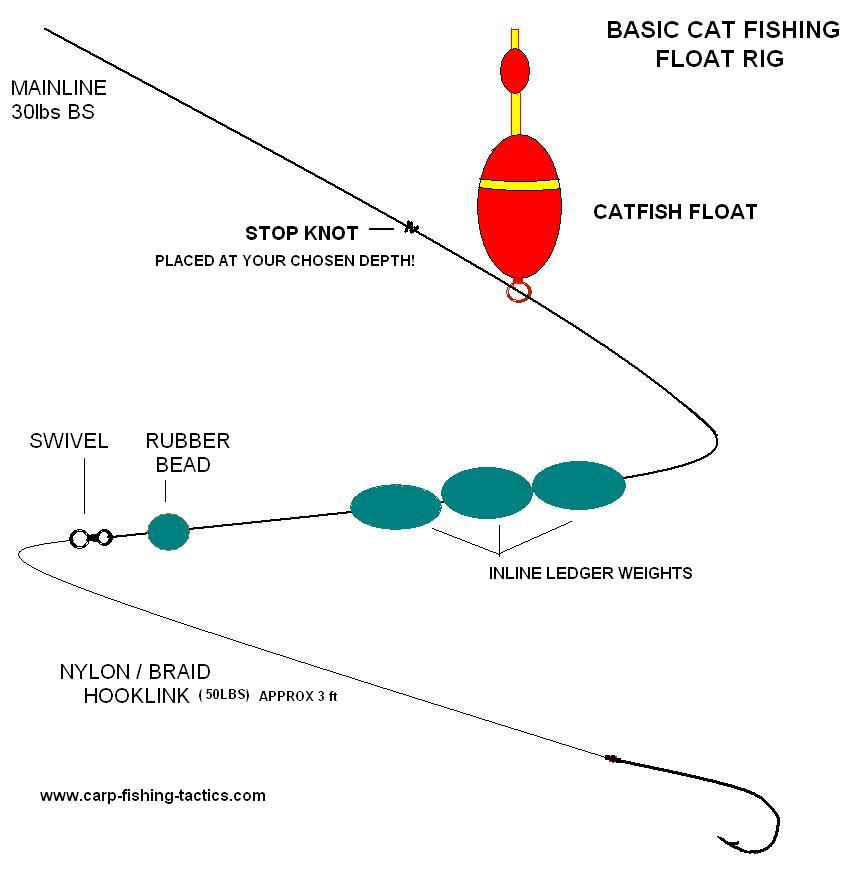 This is a basic float rig for catching catfish. It can be used to trot a bait down the river through the currents and along the contours of the river beds and drop-off points where the water goes deeper. It is a great float fishing method that big cats usually fall to, although, you'll need to adjust it to suit your own fishing situation.

It consists of a free-running catfish float, which is allowed to slide up and down the mainline (30 pounds breaking strain). On the mainline end, it is stopped by a basic stop knot. This should be set at the depth you want the bait to drop to. This means you can set it to position a bait on a ledge as the water deepens in the river.

Before a swivel is tied on the end of the mainline, you thread on a few inline ledger weights. These help to anchor the hooklink to the river bed. How many you need to use depends on how strong the current is on the day of cat fishing the rivers. A rubber bead is placed on after the leads to help buffer the weights on the swivel, and protect the knot.

A swivel can now be tied to the end of the mainline, and a 3 foot long trace of either nylon, or braid, is tied to the line with the hook tied on the end of the trace. The swivel needs to be strong. In the diagram, a 100 pound BS swivel is used.

Fishing for a Big Catfish in French Waters!

Tactics for Catching Huge Catfish on the Big Rivers